My life has changed!

Before the Aqua System was developed, plaster impressions were fit to the residual limb by using the hands. However, an orthopaedic technician’s hand fitting can never build up pressure as evenly and extensively as is possible by using the Symphonie Aqua System. In the past, the problem was approached by working with selective points. Even a slight change of the limb immediately resulted in unpleasant pressure in the socket. The great advantage of the Aqua System is that the pressure built up at the limb is widely spread, so that the bodyweight is distributed much better.
Three weeks after trying on the prosthesis for the first time, I returned for follow-up inspection. And, what can I say – there wasn’t a single rectification needed on the socket. And up to today, about a half year after receiving a prosthetic socket with the aid of the Aqua System, I haven’t had even the slightest problem with the new prosthesis.
Back then, I donned the new prosthesis and walked immediately, without any problems and most importantly, absolutely free of pain. It was shortly checked to see if everything really fit properly. And that was it – no problems, for months. No regrinding, no rework needed, nothing. From the beginning, everything just fit.

How has my life changed?
Previously, my old prosthesis just didn’t allow me to act on impulse. With the Symphonie Aqua System and new socket, this changed completely. “There’s a pond – I’m jumping in!” I no longer even think about whether there are any disadvantages of the prosthetic socket getting wet.
Because of the even pressure distribution, one puts on the prosthetic socket without pain. In the past, when the pressure was distributed to certain points, I often had pain, as the entire weight was carried by only a few areas. Today, I even look forward to putting on the new prosthesis in the morning and feeling how the weight is distributed in the entire socket. And one feels this already at the first plaster impression. One immediately has a very secure hold and feels that the socket simply fits properly. That is just huge!
And now, I just ride; I sit on my bicycle and take off! Biking from Rosenheim (Germany) to Lake Garda (Italy) is no longer a problem at all for me. Next year we will be biking until we reach the sea, which will be 800 km. We’ll ride through and get there in two or three days. Then, at some point, my major goal – the America trip. Bicycling from the East Coast to the West Coast. And I have to honestly say that without the Aqua System, such a trip would have been unthinkable. There was no deliberation at all about riding a bicycle. Now, it’s just utterly fantastic! 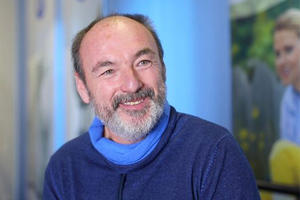